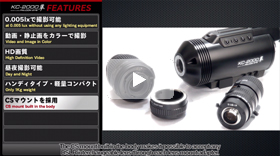 The KC-2000 night vision camera boasts seven outstanding features. It can capture still images as well as videos, in color, even with luminance as low as 0.005 lx (almost equal to the moon light), for almost five hours with a world-standard 7.4V battery. Let’s find its features more in detail.

Four Lenses Recommended for the KC-2000 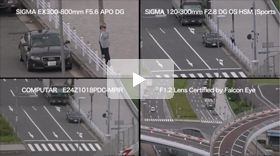 We recommend four lenses that match the specific application purposes of the KC-2000 users. We prepared various video feeds captured with those four recommended lenses for your understanding of their characteristics. These video feeds were captured at positions away 500 meters from the subjects. 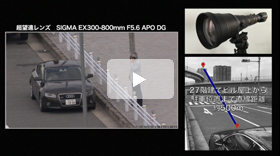 It delivers clear images of even the number plate of a car 500 meters away from the camera. 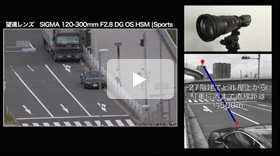 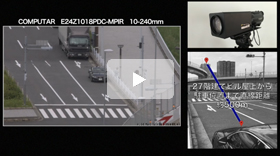 It makes vibration-free zooming-in and –out possible thanks for its power controller. 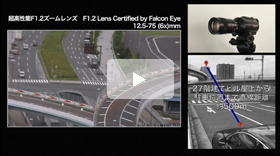 It boasts an F1.2 fast maximum aperture and a 6x zoom power for a wide range of application. 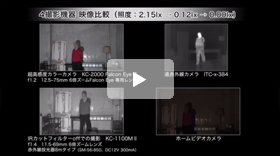 We have received various comments from our users. Some of them confuse (or mix up) “Detection” and “Recognition” with “Identifidation” in watching captured or stored images with color-night-vision, thermal and infrared cameras. Therefore, we prepared 4cam video feeds for better understanding of the differences among images with the Falcon Eye KC-series color-night-vision cameras and other equipment. Check the differences between “Detection”, “Recognition” and “Identification”. 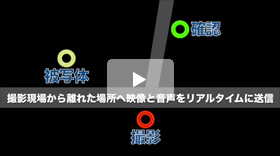 KC-2000-IT Kit is a transmission system for sending video images and sound signals to a backup team far away from the camera, without time lag. Working distances range from 50 to 80 meters (subject to some changes depending upon working environment). It is a very convenient system since both the front image capturing and rear surveillance teams can share the real-time images at the same time.
① Most suitable for surveillance and investigation operations
② Without any delay in images transmitted
③ Both front and rear teams can share the same real time images and sound signals

Images of the Sea Firefly of Tokyo Bay 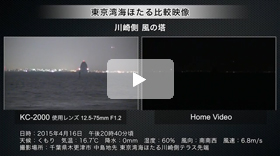 Kawasaki side
How waves lapping onto the shore can be captured in conditions dark at night?
We took images with the KC-2000 and home video cameras. As you see, the KC-2000 captures images of waves clearly only with the low light of the nature, even under the extremely adverse working conditions in the cloudy night. 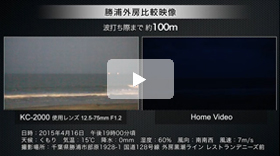 Images captured at night from positions about 100 and 150 meters away from the foreshore.
Light from the sea side was not available at all in this condition. It was impossible to see the conditions of the waves in the shoreline with the naked eyes, but KC-2000 night vision camera delivered clear images by capturing feeble light as low as 0.005 lx.

People walking in and out of the door at night 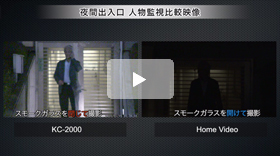 These are videos we prepared by capturing people walking in and out of the door, at night, from our car outside, through its smoked glass window to check the performance of the KC-2000.
The left-side video was captured with the KC-2000 with its 11.5-69mm lens set at f=1.4, through a smoked-glass window of the car.
The right-side video was captured with a home video camera. It was impossible to start capturing images through the smoked-glass window. So we started shooting the scene with the window open, then, in 11 seconds, closed the window. The screen became completely dark. 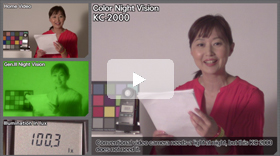 How dark the environment can be when capturing images with the KC-2000 night vision camera?
To test its performance, we intentionally created dark environment not available in the world of nature, in a studio, and tested capabilities of the KC-2000, the 3rd generation Image Intensifier tube and a home video camera.
Shown in the left below corner of the screen are luminance levels within the studio. Check the luminance levels of the respective videos by yourself. 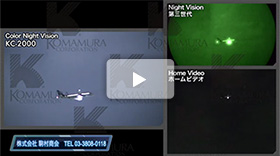 With the KC-2000, even the airline company name on the tail wing with only starlight-level luminance is visible. 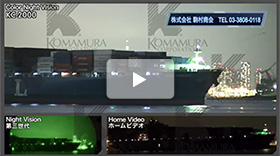 It was impossible to capture images at night with a home video camera, but with the KC-2000 even the nationality and the draft line of the ship as well as commodity indication marks are visible, in color.
The KC-2000 is ideal for surveillance of coastlines and restricted areas at night. You can easily find intruders at night, whether they are people or animals. You can distinguish even the clothing colors as well as personal belongings. 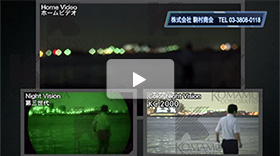 KC-2000 offers optimum image conditions to put coast line and restricted areas under surveillance with recording capability in the dark.
It can identify the color of clothes and the details of accompanied goods of the target and record them into SD card for evidence. 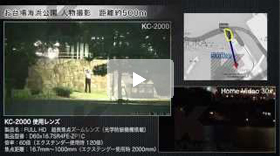 1. Odaiba Coastal Area Park in Tokyo, people, about 500mm away, at night, at around 20:15 in July, with the ultra-telephoto lens – the model was Tosh Komamura, the producer of the KC-2000 night vision camera.
The combination of the KC-2000 and the lens was perfect.
2. Odaiba Container Yard, about 2,000 meters away from the subject
The combination captured clear images of the people working as well as the logo marks of the containers, in conditions the naked eyes do not work.
Since the Full HD zoom lens incorporates an image stabilizer, the combination captured clear images without vibration even when the extender was turned on for the maximum magnification ratio of 120x (at around 20:05 in July). 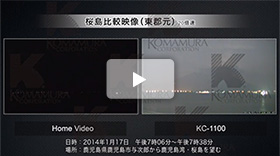 The Sakurajima Island at night and smoke from the volcano – images were captured from Kagoshima City.
The shape of the peak of the mountain and volcanic smoke conditions could be seen when the moon rises.
Equipment used: KC-1100 and Kowa Macro Zoom Lens 11.5-69mm F:1.4 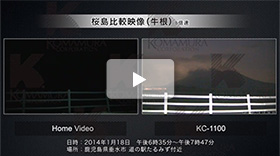 The Sakurajima Island at night and volcanic smoke captured from the Roadside Station in Tarumi City (about 10km away from the island)
Equipment used: KC-1100 and Kowa Marco Zoom Lens 11.5-69mm F:1.4 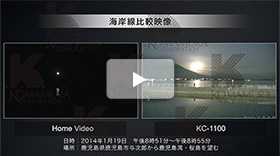 These images were captured from a park in Kagoshima City to test performance characteristics of surveillance cameras at night in coastal lines.
By chance, a person in walking training appeared from the left side. The home video camera we had was unable to capture the image of the person (only visible is the shadow of the person, with the moonlight).
Equipment used: KC-1100 and Kowa Macro Zoom Lens 11.-69mm F:1.4)

Image of a constellation (Sakurajima Island) 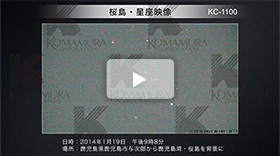 This is a video of Orion captured at night from Kagoshima Bay in January 2014.
Betelgeuse (around the right shoulder of Orion) and Rigel (around its left leg) are clearly visible. Also, because of the high performance of the equipment, small stars near the two larger stars, which are invisible with the naked eyes, can be seen.
Equipment used: KC-1100 and Kowa Macro Zoom Lens 11.5-69mm F:1.4 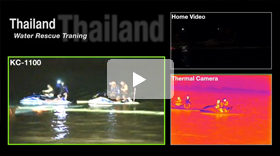 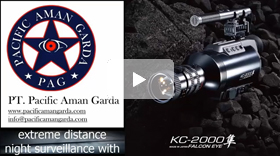 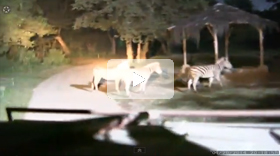